Splash Down in Haiti and Saving Lives with Richard McGlaughlin, M.D.

BIRMINGHAM — It was his love of flying and his intrinsic need to help others that originally led Richard McGlaughlin, M.D., to Haiti in 2010. In January 2010, the small Caribbean country of Haiti had been rocked by a devastating earthquake, and the task of getting supplies to the recovering nation was proving more than just difficult.

Transportation of what life-saving supplies to Haiti by cargo ship was nearly impossible because the ships were unable to get to Port-au-Prince. Dr. McGlaughlin, who owned a small, single-engine aircraft read about the situation on a member’s-forum for the Cirrus Owners & Pilots Association. Bahamas Habitat was asking for volunteers to fly missions to Haiti to transport supplies, so Dr. McGlaughlin loaded up his aircraft with medical supplies for a trip “that has changed my life.”

That was almost seven years ago, and Dr. McGlaughlin has continued making trips to Haiti every year since…including one trip that nearly took his life and that of his daughter.

Dr. McGlaughlin, a gastroenterologist in Birmingham, wasn’t sure what to expect when he first arrived at the makeshift medical camps in Haiti. The one thing he knew for certain was that he was there for a reason.

“It started out as an airplane adventure just bringing in the supplies that were needed. But, the needs of the Haitians were so great, I just couldn’t turn my back,” Dr. McGlaughlin said. “I felt I could make a difference here. I wanted to make a difference.”

For Dr. McGlaughlin, the key wasn’t just to volunteer once in a while. His theory is a little different. He believes that to make a difference, a constant presence is necessary.

“If you apply continual force on a single point more than once, not just over a weekend or two, it can open eyes. Even that wasn’t enough to help the Haitians. We would give them medicine and treat their wounds, but medicine runs out and sometimes wounds don’t heal, so visiting just once in a while wasn’t working the way we wanted it to. We knew the Haitians needed more,” Dr. McGlaughlin said.

When a cholera outbreak began to ravage the residents, Dr. McGlaughlin, whose background is in cholera research and treatment, found himself more useful than ever. He began working with St. Luke’s Hospital to not only treat the Haitians infected with cholera, but also help train other aid workers in the treatment protocols.

“Father Rick is the type of person who makes you want to be a better person,” Dr. McGlaughlin said. “He finds these resources, these people that need work, and the people at the camp need certain things, and Father Rick just finds ways to put them together. He’s built a community through connections, given work and jobs to those who need it…it’s amazing to be part of that,” Dr. McGlaughlin said.

When Dr. McGlaughlin first started working with St. Luke’s, he likened the atmosphere to a smaller version of the United Nations with volunteers from many nations pooling their resources together. Everyone lived in tents, ate together, and unfortunately worked in less-than-the-best medical circumstances.

After the earthquake in 2010, supplies had been shipped in to Haiti by cargo ships and housed in large, metal cargo containers. When the containers were emptied, they had served their purpose, for the moment. When Dr. McGlaughlin told Father Rick more permanent facilities were necessary for the more complicated and urgent cases needing some semblance of a sterile environment until a proper facility could be built, Father Rick produced a solution.

“We built a container hospital,” Dr. McGlaughlin laughed! “And, it worked for what we needed at the time. You use what you have, and that’s what we had.”

Dr. McGlaughlin continues to fly to Haiti, lending his medical skills and his flying expertise to the people of Haiti he has come to know and love. One flight stands out more than any other. In January 2012, he and his daughter, Elaine, were about to leave the Miami airport when he suggested she purchase a camera. This would be her first trip to Haiti with him, and he knew she would want to document the occasion. When she returned with a small, disposable camera, Dr. McGlaughlin laughed and suggested she try again with a better camera.

“It was a beautiful day for a flight,” he laughed. “You couldn’t have asked for more perfect conditions for flying…until I noticed the oil pressure was dropping. I didn’t want to alarm Elaine. She wasn’t paying much attention to me. She was studying the book for her new camera, but she finally looked at me when she noticed my voice changed.”

Dr. McGlaughlin said they didn’t have much time once the oil pressure sharply dropped, seizing the engine, and freezing the propeller. His plane was equipped with a parachute, which is now standard on all Cirrus models. With the parachute engaged, the pair had enough time to get out of the aircraft before it was too late. As they sat in the life raft, they watched the medicine and equipment floating to the surface, but they were safe. Then the disposable – waterproof – camera floated up. It wasn’t what they expected, but they made good use of it.

“It happened, and it could have been so much worse. So much worse,” Dr. McGlaughlin said shaking his head. “But, it wasn’t. Elaine and I flew back to Haiti together and finished the trip. I’ve even lectured on behalf of the use of the plane’s parachute. Some pilots won’t use it. It’s there…use it. I’m here today because I did.”

Father Rick, Dr. McGlaughlin and the battalion of volunteers attached to St. Luke’s Hospital in Haiti continue to work in Haiti by building schools and rendering medical aid to residents day in and day out. Dr. McGlaughlin’s next scheduled visit will be in January 2017, and he plans to take as many donated items as his plane will hold.

However, St. Luke’s Hospital is in great need of donations. The physicians and other volunteers donate of their time and skills, but monetary donations can move mountains. If you would like to donate and be a part of the St. Luke’s Hospital movement in Haiti, visit St. Luke’s Foundation for Haiti at www.stlukehaiti.org. 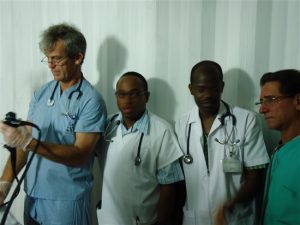 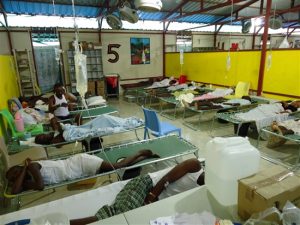 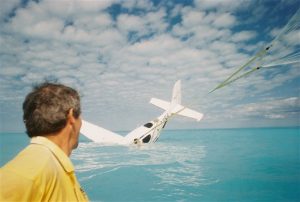