Home → Current News → All in the Family with the Smiths

All in the Family with the Smiths

LINEVILLE — The City of Lineville is a small, rural community of about 2,500 residents in Clay County. At the heart of the community lies Lineville Clinic, home of the Smith family medical practice. 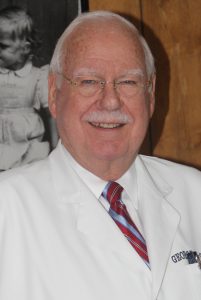 Patriarch George Smith Sr., M.D., graduated from Howard College with a Bachelor’s degree in Pharmacy and worked for three years with Eli Lilly as a pharmaceutical representative, but something was missing.

“I felt like I could do more than I was doing as a pharmaceutical rep, so I applied to medical school,” Dr. Smith said. “My wife and I really wanted to come back to Lineville, but I wanted to come back here as a doctor. I’m a fourth generation Smith. My great grandfather helped settle the area. This is home.”

In 1966, Dr. Smith came back to Lineville and bought his practice from a physician who wanted to focus more on nursing homes than private medicine. His first day in his new practice was July 1, 1966 – the first day of Medicare.

“I got this survey asking what my office fee was, and I answered truthfully. It was $4, and that stuck with me for another 10 or 12 years because they wouldn’t let me change it. When I first started out it was $2. Can you imagine if I hadn’t changed it?” Dr. Smith laughed.

Since then, Dr. Smith has seen not only his community grow, but also his practice. In 1986, his son, Buddy Smith, M.D., joined the practice. 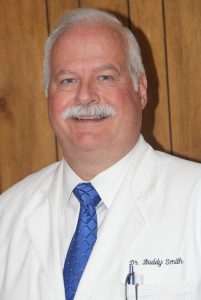 “I grew up going on house calls with Daddy, carrying his doctor’s bag. He did a lot of house calls in the 60s and 70s, and I was impressed with how people treated my father, how he was respected by his patients and the community. There’s a reason why he’s Dr. Smith and I’m Dr. Buddy. There’s only one Dr. Smith. He’s a legend,” Dr. Buddy said.

Dr. Buddy said one of the things that has contributed to the longevity of the practice, given that it is not affiliated with a large hospital or company, is its reputation largely due to his father. With patients willing to drive up to 50 miles to visit the clinic, and some patients who have been with the clinic since the beginning, there’s something to be said for small town reputations.

“In a small town, everyone knows you,” Dr. Buddy said, “so it’s important to remember why we’re here. We have patients who come a long way to see us because of our reputation. The patients are the reason why we’ve been in practice here for so long. We never forget why we’re here.”

And, that’s just one of the reasons why Dr. Buddy’s daughter, Ashley Smith Lane, M.D., joined the practice in October 2016. Dr. Smith’s Lineville Clinic officially became a family affair with three generations of physicians practicing under the same roof. 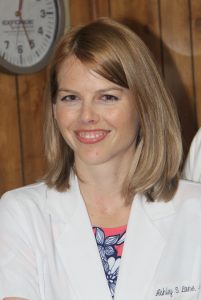 “I grew up here and already knew a lot of the people,” Dr. Lane said. “This is a great, established practice, and having these two, amazing mentors during a time when medicine is changing so quickly definitely makes being a young practicing physician a bit easier.”

Dr. Lane said she was prepared for a bit of inconvenience after finishing her residency in Huntsville, where tapping into the medical pool for specialty consults was as easy as picking up a phone. But, her heart was calling her back to Lineville…back to her home.

“Being a young doctor today is already complicated by all the changing rules and regulations, but add in being in a rural setting makes it more complicated because we don’t have the ease of getting our patients to the proper specialists as quickly as we would like,” Dr. Lane explained. “Coming from my residency in Huntsville where all the specialists were pretty much right there at our fingertips to a rural situation that allowed me to be a more well-rounded family doctor…it’s fulfilling and challenging all at the same time. I knew in residency I wanted to come back home, and I knew I would need these skills when I came back here. I loved my time in Huntsville, but this is home.”

Part of what Dr. Lane said she loves about practicing with her father and grandfather is the true partnership she has in the practice.

“It’s been a lot of fun working with both my father and grandfather – it’s actually pretty cool! Of course I’m learning a lot from them, but they also let me do my own thing and be myself. That means a lot, too, to allow me to be myself in the practice as a partner,” she said.

Together, the trio face the challenges of medicine together.

“We have to balance the demands of a health care system with a rural small business. And, everything is more difficult when you’re in a rural setting from communication to referrals to transportation…it’s all challenging,” Dr. Buddy explained. “The biggest challenge is to incorporate all the changes in medicine, such as MACRA, MIPS, advanced payment models, quality incentives, into an independent practice in a rural setting when none of them necessarily translate to my situation. These new rules are written for large practices with large IT departments, not small practices or independent practices like ours. It’s a huge challenge to try to meet these guidelines when you don’t have these resources. It takes more and more of my time away from patient care to do these other things. I would say now it’s 50/50 split between sitting at a computer and sitting with a patient. It’s about equal when we should be caring for our patients more than working computers.”

Another change? Alabama’s prescription drug abuse problem. It’s an issue Dr. Buddy was willing to tackle as one of the architects of the Medical Association’s Opioid Prescribing education course.

“We could see the need was growing because of the lack of prescribing education among our physicians. It was a need that had to be addressed, so we created the Opioid Prescribing Course,” Dr. Buddy said. “Doctors were closing their doors and quitting their practices because of what they were seeing happen in their communities. We needed to find a way to educate our doctors so they could keep their doors open and understand how to prescribe these medications effectively and efficiently. I think we have been successful in educating physicians about the dangers of opioids, but I’m not so sure if we’ve been as successful about continuing to practice pain management. It’s scary out there, but it’s rewarding if done correctly.”

With all the changes in medicine throughout the years, from Medicare to electronic records, Dr. Smith said looking back, he would not have done things any differently.

“I’ve been so happy to do what I do for all these years. It was never about the money. It was always about our patients. I’m sure I could have done better somewhere else, but that’s not why we do what we do, is it? It’s been very rewarding. You know you’ve done some good, and that’s the main thing. I’ve done what I call ‘rounds at the Pig’ at the local Piggly Wiggly where someone might stop me and ask about this or that. I still enjoy stopping to chat,” he laughed.

When Dr. Smith opened the doors of the clinic in 1966, he never expected having three generations of his family practicing medicine under the same shingle, but he can’t hide the smile when you mention his son and granddaughter.

“It’s special,” he said. “I know how rare this kind of thing is, especially for two physicians to choose family medicine and to come back home to a rural practice in a small town…that’s very special.”