Always on the Move with Jack Hasson, M.D.

BIRMINGHAM — April 13, 2013, is a day Americans will never forget. Runners from around the world gathered for the 117th Annual Boston Marathon. With 40,000 athletes racing toward the finish line like any other marathon. At 2:49 p.m. (ET), two bombs exploded about a mile away from the finish line nearly three hours after the winner crossed over. There were still more than 5,700 runners left in the race. Birmingham pulmonary specialist Jack Hasson had yet to cross that finish line.

“At first I really didn’t know there was anything wrong. You always hear ambulance sirens when you’re running in a race. There’s always a siren somewhere, but you get used to it. I was coming over Heartbreak Hill and back into Boston when I was hearing more and more sirens. I didn’t have any idea what was going on until we were stopped about a mile away from the finish line. I didn’t finish, but I was very close. I was right there. They stopped us a mile from the finish when they told us about the bombing,” Dr. Hasson explained taking a deep breath. He still remembers the day as perfectly as if it were yesterday. “That was the most horrible feeling when they told us what happened. We had no idea how big it was, how bad the casualties were, and then my brain wanted to slip into doctor-mode, but there was no way I could do anything to help.”

Dr. Hasson first began running the Boston Marathon in the late 1970s when participants numbered around 5,000. Back in those early days his wife would not only travel with him to the race but would also meet him at the finish line. But, on this day in April he admitted that as much as he had wanted to see his lovely wife at the end of the race, he was more relieved than ever that she wasn’t waiting for him.

“My wife was safe back at the hotel, thank goodness. In the old days when she could find me and see me finish, she would come to the finish line, but now with 40,000 people running, it’s kind of hard to see me!” he laughed.

With the sun setting, temperatures falling, and no cell service, Dr. Hasson had to navigate his way through the chaos of a city under siege to find his way back to his hotel and his wife. Until he made it back to the hotel, his wife could only wonder about his safety. It was a long 45 minutes.

“Considering where they placed the bombs on the route, it truly is a miracle that more people weren’t killed or injured. It could have been so much worse, and yes I do consider myself very lucky not to have been any closer. But, you have to go on with your life. You can’t wait for something bad to happen. We’re living in a different world today with mass shootings and terrorist threats. We’re living with these things every day, but you can’t allow these things to affect how you live your life. You still have to take care of your business and life your life the best way you can. You can’t stop doing what you enjoy,” Dr. Hasson said.

The bombing in 2013 did not stop Dr. Hasson from running. In fact, the Boston Athletic Association gave participants who ran at least half the distance but were not able to complete the 2013 Marathon early entry into the 2014 Marathon. Dr. Hasson was unable to finish the race in 2013, but he would in 2014.

“I went back in 2014 because I had to finish. They sent me a medal for the 2013 race, which I was not expecting. They gave me a finish time that was projected based on my last checkpoint and that was my finish time. That was pretty cool! They didn’t have to do that, but they treated us all very nice, but I just had to finish. I couldn’t stand it! That was the last one I ran,” he said.

In all, Dr. Hasson has participated in 130 marathons, but he hasn’t completely unlaced his running shoes. Instead, he’s shortened his routes by running about nine half marathons each year. But if you think he’s slowing down, think again.

Dr. Hasson became interested in art as a teenager, but even he will tell you it was not something he did on a regular basis. It was more of a hobby of drawing pictures here and there, but he never took any formal lessons until he was stationed with the Air Force in Warner Robins, Ga. With some extra time on his hands, he enrolled in a watercolor course in Macon. What began as a once-a-week class eventually turned into a passion of putting brush to canvas.

“About 15 years ago I decided if I was ever really going to do this I had better get started. So I started taking lessons at the Birmingham Museum of Art. I took drawing lessons first working with live models, which helped me to be able to learn to look at something with a different light. You learn to look at things so differently, to break things down. Green is not green on a tree, but yellows, reds, browns. You get more perceptive of colors, light and dark, shadows. I look at a scene completely different now than I ever used to,” Dr. Hasson explained.

As motivation to continue painting, Dr. Hasson joined the Watercolor Society of Alabama, which has given him the opportunity to exhibit his work, and he is now a Bronze Signature Member.

“Now I have motivation to continue to improve because I get to exhibit with real artists,” Dr. Hasson laughed. “I enter my work into these exhibits now, too. I take photos of places I’ve traveled. I take photos in different angles and light — something I’d want to paint later. Being able to take photos and paint has given me a fresh look on the things in front of me…on life…the challenge is to be able to capture it again.” 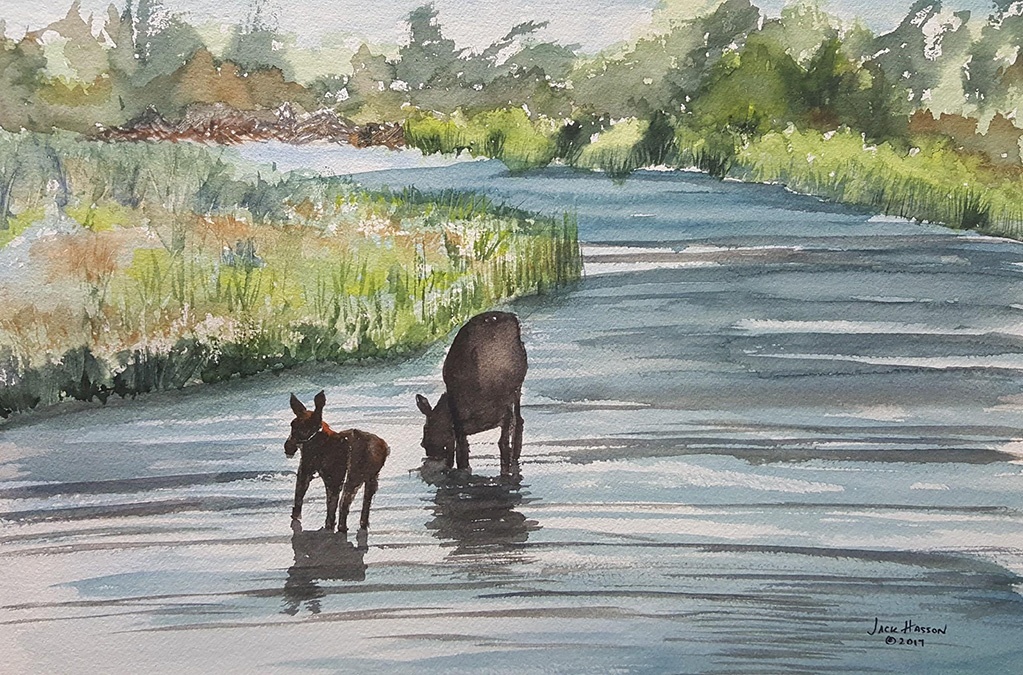 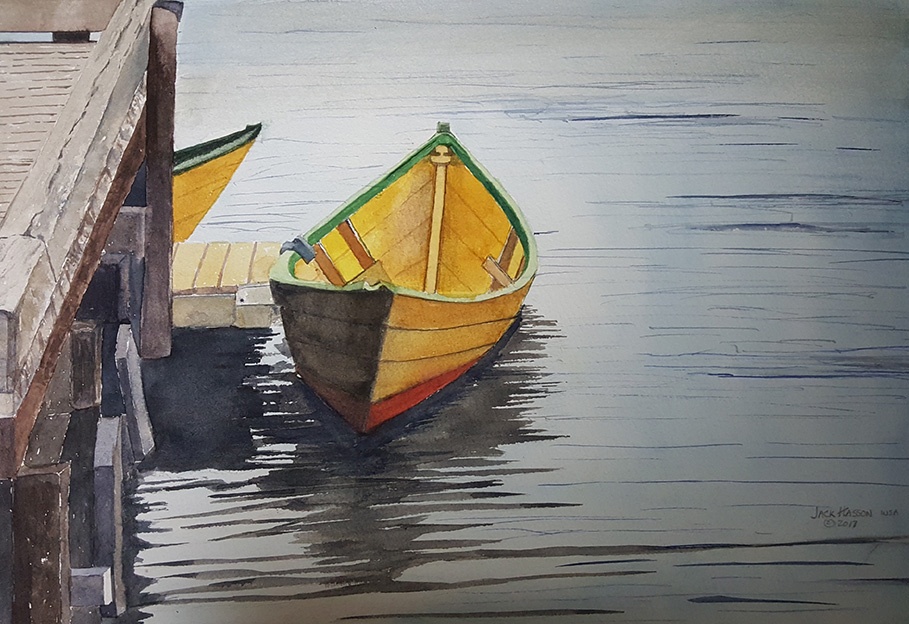 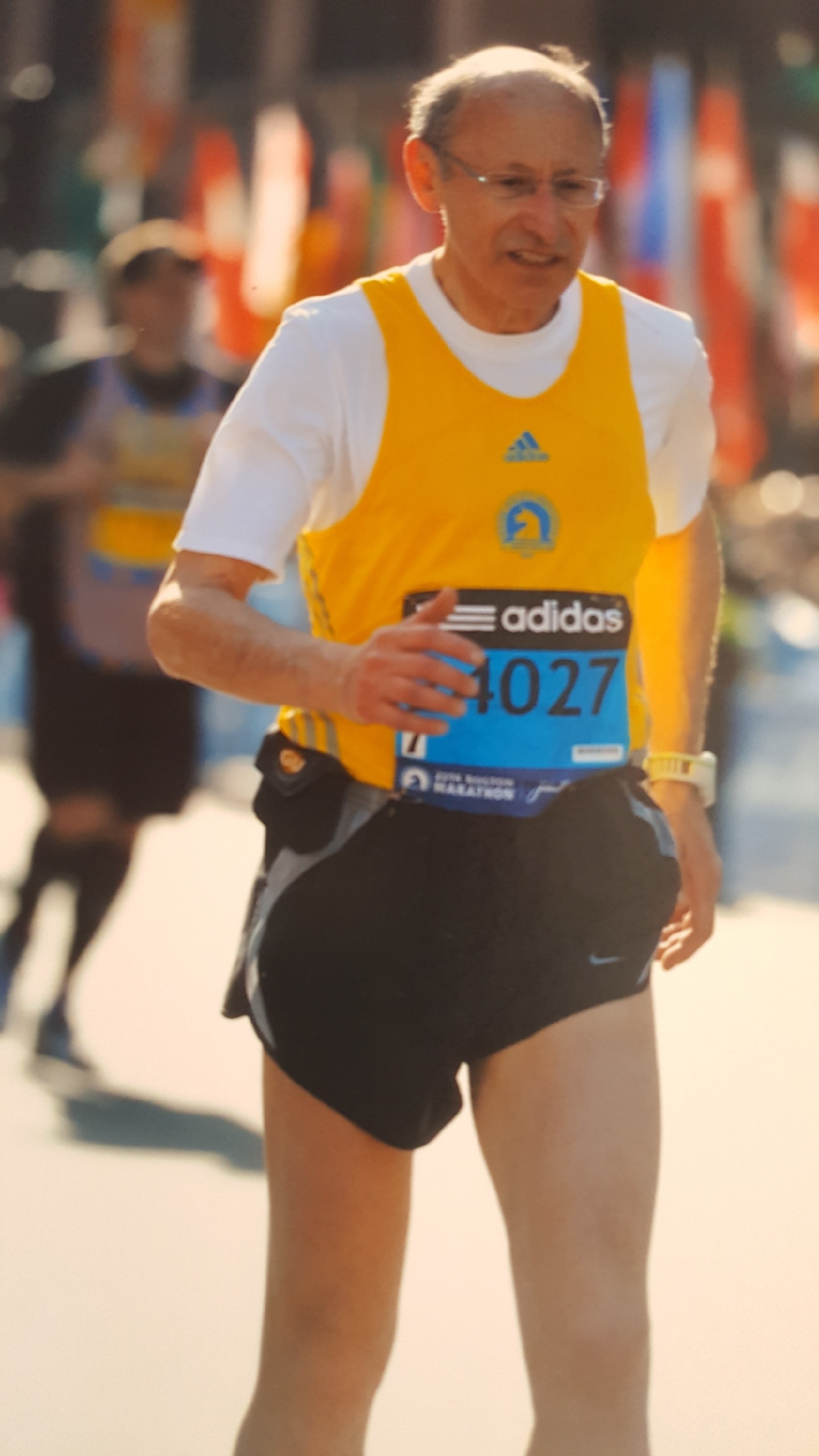