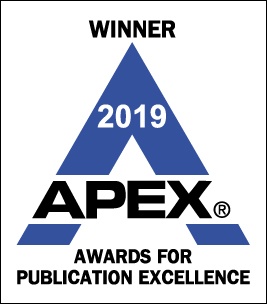 Alabama Medicine magazine has received its third international award for publication excellence. The APEX 2019 awards were based on excellence in graphic design, editorial content and the success of the entry – in the opinion of the judges – in achieving overall communications effectiveness and excellence.

With 1,278 entries were evaluated in this international competition, there were 507 APEX Awards of Excellence given to recognize excellence in 100 individual categories. In Alabama Medicine magazine’s category of Magazines, Journals & Tabloids, there were 261 award recipients. This category had winners from Singapore as well as the United States, and Alabama Medicine magazine was the only winner in this category from Alabama and one of two winners in the entire 2019 APEX Awards competition from Alabama.

APEX 2019 is the 31st Annual Awards for Publication Excellence based on excellence in graphic design, editorial content and the ability to achieve overall communications excellence. This international competition is sponsored by Communications Concepts.

Alabama Medicine is the official magazine of the Medical Association of the State of Alabama. For more information about the magazine, please contact mjackson@alamedical.org.

The Alabama Chapter of the American College of Physicians recently presented the 2018 Laureate Award to Bernard H. Eichold II, MD, DrPH, FACP of Mobile. He has been a supporter of the Col­lege and has represented its pro­fessional ideals throughout his career. He has also been a long­standing advocate for public health in the State of Alabama through his roles with the Mobile County Health Department.

Dr. Eichold received a Bachelor of Science degree from Tulane University in New Orleans, La., in 1975, and then obtained his medical degree from Tulane University School of Medicine in 1979. In addition, he also received Master of Public Health and Doctor of Public Health degrees from the School of Public Health and Tropical Medicine at Tulane University in 1978 and 1980, respectively. Dr. Eichold completed his residency in Internal Medicine at the University of South Alabama in 1983. He served as a clinical fellow in Diabetes and Endocrinology at the Joslin Clinic and as a research fellow in Endocrinology at Brigham & Women’s Hospital at Harvard Medical School from 1983 to 1984. He then entered private practice in 1984 by join­ing Mobile Medical Clinic and continued in private practice until 1990 when he became the Health Officer for the Mobile County Health Department.

During his time with the Mobile County Health Department, Dr. Eichold has made many contributions to both Mobile County and the State of Alabama. In addition to being the Mobile County Health Officer, he served as the Assistant State Health Officer for five years, and as the Area Health Officer since 1995. In these roles, he has been a staunch advocate of improving the health of his fellow Alabamians. Examples of his efforts during his career include improving vaccination rates, increasing mental health services, combating tobacco use, reducing teen pregnancies, and promoting of healthy activities.

Dr. Eichold has been active in academic medicine throughout his professional career as well. He served as an Adjunct Assistant Professor with the School of Public Health and Tropical Medicine at Tulane University from 1990 to 2005, and as a Clinical Assistant Professor from 1992 to 2005 in the University’s Community Medicine Program. He also served as Clinical Assis­tant Professor in the Department of Medicine at the University of South Alabama starting in 1984, rose to the rank of Clinical Professor in 1994, and continues to serve as an Adjunct Profes­sor today. During his tenure within the Department of Medicine at the University of South Alabama, he served as the Director of the Division of Epidemiology and Preventive Medicine from 1990 to 2011 and as the Public Health and Epidemiology course director for more than 20 years.

In addition to his roles in public health and academics, Dr. Eichold has provided service to the community and the country. He served in the U.S. Navy Reserve and currently is an Aviation Medical Examiner for the Federal Aviation Administration. He has been an active member in many societies and organiza­tions over his career, including the American College of Physi­cians, Aerospace Medical Association, Coastal Conservation Association, NASA DEVELOP program, and the United Way. Dr. Eichold has served on the governing boards of the Alabama School of Mathematics and Science Foundation, the Bay Area Food Bank, the Coalition for a Drug-Free Mobile County, the Mobile Association for Retarded Citizens Inc., and the Mobile Chapter of the Sickle Disease Association of America. He is also a past president of the Alabama Board of the American Diabetes Association.

Because of his long career of distinguished service to others, Dr. Eichold has received multiple honors and awards. In 2018, he was recognized as the Alumnus of the Year from the Tulane University School of Public Health and Tropical Medicine. He received the William Henry Sanders Award from the Medical Association of the State of Alabama in 2002 in recognition of his many years of committed service to the public health needs of Alabama. In 2012, he received the Exceptional Public Achievement Medal from NASA and was also recognized as Mobilian of the Year.

Dr. Eichold is married to his beloved wife, Carolyn Maxwell Delchamps, and has three children. In his free time, he enjoys being with family at their farm and helping others.